One thing that blocks people from using their second language is fear of making mistakes. Here’s the big secret, making mistakes is a HUGE advantage in connecting with other people. In fact, if you’re single and want to get out more, just throw in a few extra grammatical errors for good measure, and I bet you will no longer be paying for your own drinks. Just kidding. Kind of. Let me explain:

When I first arrived in Colombia at the age of 28, I was picked up at the airport by a perfect stranger, or rather a friend of a friend. She had invited me to rent a room in her home for the six weeks I planned to stay. She spoke no English, an ideal situation for me. I had been studying Spanish for months. It wasn´t until we were sitting in the cab, hands clasped over each other’s hands that I realized I knew lots of Spanish words but couldn’t string together a coherent sentence.

I started pointing at things in the cab and naming them. Window–ventana, seat–silla, tree (outside the window)–arbol, man–hombre, woman–mujer, taxi–taxi. Thus whatever lingual intelligence I lacked, at least I was earnestly trying. I smiled while I talked. She laughed.

This worked! Despite the communicative limitations we bonded. Not only that but she insisted that I meet her nephew, a Colombian television director and university professor who could be of great assistance on my journalism thesis. He invited us to his apartment.

“Amparo,” I said (my new friend’s name was Amparo), “Maybe I should work on my Spanish a bit more before I make any highfalutin journalism contacts.” Actually I looked up how to say this on google translate and the repeated it from memory. Highfalutin translated as prominente.

The television director had an impressive penthouse apartment with a lofty view of downtown and the walls were covered in art he had painted himself. I had a series of 3×5 index cards with google translated questions on media and conflict that my palms were sweating into a little bit. However I pushed past my nervousness and maintained a conversation. Every thime I grasped a concept he was talking about I yelped out, “Exacto!” with all the enthusiasm of a drowning woman throwing herself upon a rubber dingy.

He invited me out for hamburgers afterward. We clicked. One year and two months later we got married. Now we have a kid who we are totally going to keep. 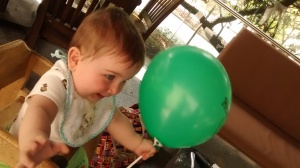 The point is that, as the very famous Brene Brown thoroughly researched and demonstrated in her books and Ted Talks: vulnerability connects us to one another. In one of the best parts she explains that courage does not mean that you are extremely strong or formidable, it means you are able to move forward while being vulnerable. By pretending to be perfect we automatically become inauthentic which makes it impossible to connect with other human beings. Only by getting comfortable with our imperfections can we really communicate in a way that means anything, no matter how many grammatical mistakes there may or may not be in how we say it.

So, there you have it. The world’s best kept secret is that the key to communicating with anyone is not speaking one hundred languages perfectly, it’s about attempting any language as imperfectly as necessary. The bonus is that as soon as you relax and have fun with your new language skills will really start to take off. And a little love always helps too.

2 thoughts on “Humility: The Best Kept Secret for Universal Communication”